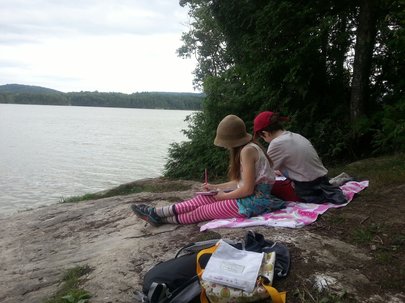 When I think back about we somehow stumbled upon homeschooling, I still scratch my head in amazement about how far we have come over the past six years in this adventure.  I never pegged myself as a "homeschool" mom.  I went to the traditional ivy-league type of private school where you were given detention if you were not wearing your uniform blazer, and thought my kids would do the same.  I got a great education (thanks to my parents) and participated in many activities, even became class president, etc.  It was not until I started homeschooling my own two kids that I realized the piece that I was missing all those adolescent years.  I was taught all the important academics while in school, such as geometry, physics, french and literature, but I was not taught how to think, be creative, or to love learning.  I was taught academics, great academics, but I was never passionate about much of it.

I vividly remember waking up every morning at 5:45am like a Borg drone, scrambling to put on my school uniform (careful not to miss any piece of it for fear of detention), eating breakfast half asleep, grabbing school books and jamming them into my heavy backpack, and then piling into the car for the 45 minute ride all the way into Atlanta to go to school.  Since we lived in the "sticks" (as my city friends called it), we would carpool with other families to drive to school, or ride a community bus, and it was always an ordeal to get us there.  I remember sitting in classes all day for 50 minute periods, the bell ringing, and then running wildly to change books and make it to the next class on time.  After school, we would wait until our ride came to pick us up, usually around 4:30 or so, and then by the time we got home, it was dinner time.  Then there was a couple hours of homework.  I remember being tired all the time.  Plain exhausted actually.

I do remember studying poetry in English class in the 11th grade, and suddenly felt awakened in what was a rather boring class.  I aced the final exam that centered around deciphering famous poetry, and remembered loving it.  The teacher spoke to me about my writing style, being rather surprised by it, but it was a passing moment that was easily forgotten by him.  My parents never took note either since I was generally an average student in English classes.  I also remember in creative writing assignments I also felt a real spark, but I was never given the encouragement to go farther with it, or given the time to keep moving in that direction.  I moved ahead and went to a great college, studied computers, and took a great paying job in IT Consulting, then Systems Engineering, and finally IT Management.  I was very good at my jobs, but I remember not being very happy.  I finally realized that I took the wrong path, but had no idea what the right one was.  It was not until a few years ago that I realized that my path was being a writer, a home educator, homesteader, and a chef.  Who knew?  I look back and feel saddened by the loss of years of writing and being creative.  Such a great education, but I left it having no idea who I was or what I was passionate about.

I just read and loved this article written by a homeschool mom.  Every time I talk to family, this question comes up,  "So, what are the kids doing for socialization?!"  It is so funny and so true!  Socialization is overrated I think, especially when you consider how dysfunctional most people are these days!  I don't think most parents have any idea what their kids are learning from this "socialization".  Kids don't need to be around other kids for 7-10hrs per day via school and extracurricular activities to be properly socialized.  http://m.jennifermcgrail.com/…/why-my-kids-will-never-be-s…/

"Television"
A poem by Roald Dahl

The most important thing we've learned,
So far as children are concerned,
Is never, NEVER, NEVER let
Them near your television set --
Or better still, just don't install
The idiotic thing at all.
In almost every house we've been,
We've watched them gaping at the screen.
They loll and slop and lounge about,
And stare until their eyes pop out.
(Last week in someone's place we saw
A dozen eyeballs on the floor.)
They sit and stare and stare and sit
Until they're hypnotised by it,
Until they're absolutely drunk
With all that shocking ghastly junk.
Oh yes, we know it keeps them still,
They don't climb out the window sill,
They never fight or kick or punch,
They leave you free to cook the lunch
And wash the dishes in the sink --
But did you ever stop to think,
To wonder just exactly what
This does to your beloved tot?
IT ROTS THE SENSE IN THE HEAD!
IT KILLS IMAGINATION DEAD!
IT CLOGS AND CLUTTERS UP THE MIND!
IT MAKES A CHILD SO DULL AND BLIND
HE CAN NO LONGER UNDERSTAND
A FANTASY, A FAIRYLAND!
HIS BRAIN BECOMES AS SOFT AS CHEESE!
HIS POWERS OF THINKING RUST AND FREEZE!
HE CANNOT THINK -- HE ONLY SEES!
'All right!' you'll cry. 'All right!' you'll say,
'But if we take the set away,
What shall we do to entertain
Our darling children? Please explain!'
We'll answer this by asking you,
'What used the darling ones to do?
'How used they keep themselves contented
Before this monster was invented?'
Have you forgotten? Don't you know?
We'll say it very loud and slow:
THEY ... USED ... TO ... READ! They'd READ and READ,
AND READ and READ, and then proceed
To READ some more. Great Scott! Gadzooks!
One half their lives was reading books!
The nursery shelves held books galore!
Books cluttered up the nursery floor!
And in the bedroom, by the bed,
More books were waiting to be read!
Such wondrous, fine, fantastic tales
Of dragons, gypsies, queens, and whales
And treasure isles, and distant shores
Where smugglers rowed with muffled oars,
And pirates wearing purple pants,
And sailing ships and elephants,
And cannibals crouching 'round the pot,
Stirring away at something hot.
(It smells so good, what can it be?
Good gracious, it's Penelope.)
The younger ones had Beatrix Potter
With Mr. Tod, the dirty rotter,
And Squirrel Nutkin, Pigling Bland,
And Mrs. Tiggy-Winkle and-
Just How The Camel Got His Hump,
And How the Monkey Lost His Rump,
And Mr. Toad, and bless my soul,
There's Mr. Rat and Mr. Mole-
Oh, books, what books they used to know,
Those children living long ago!
So please, oh please, we beg, we pray,
Go throw your TV set away,
And in its place you can install
A lovely bookshelf on the wall.
Then fill the shelves with lots of books,
Ignoring all the dirty looks,
The screams and yells, the bites and kicks,
And children hitting you with sticks-
Fear not, because we promise you
That, in about a week or two
Of having nothing else to do,
They'll now begin to feel the need
Of having something to read.
And once they start -- oh boy, oh boy!
You watch the slowly growing joy
That fills their hearts. They'll grow so keen
They'll wonder what they'd ever seen
In that ridiculous machine,
That nauseating, foul, unclean,
Repulsive television screen!
And later, each and every kid
Will love you more for what you did. ​