Ok, this is going to sounds strange, but this is a folk remedy that really works well for us.  I get sinus infections sometimes that start with an infection in my ear, and for many years I took antibiotics (which I am still trying to bounce back from).  Now I use these onion ear muffs and they work wonders.  Onion is POWERFUL and can kill a lot of bad pathogens.  I simply cut one yellow onion in half and bake the halves face up in the onion (skins/peels on) until they are soft (usually 20 min or so on 300 degrees).  After cooling a little so as not to burn, I use an old set of earphones to hold the half in place on my ear.  It kills bacteria and virus while on the ear, and feels warm and wonderful too for an earache!  After it loses the heat, I remove it and place it back in the oven to re-warm it for another go (if needed).  Amazing, cheap, non-invasive, and simple!  :-)​  I also use a combination of various essential oils on the back and outside of my ear (in a carrier oil to dilute, and NOT inside the ear ever!) as they can also kill virus and bacteria and work topically through the skin.

Red onions are also amazing when someone in the house gets a cold/flu or contagious virus.  We simply cut red onions into halves or quarters (if big) and place on napkins or in bowls in different rooms around the house.  The red onion pulls virus out of the air and absorbs it into the onion, reducing the amount of virus floating around.  We always keep several large red onions on hand during Vermont winters for this very purpose!!  They work for a few days before you need to replace/toss. 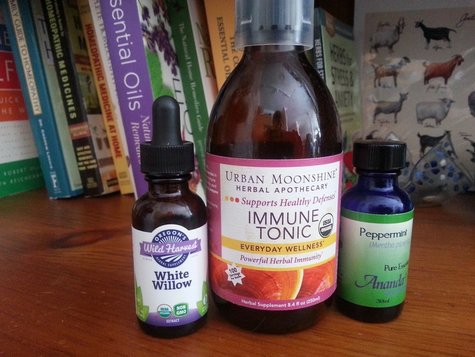 I get an occasional migraine, the classic kind with the annoying aura ("light show") that comes first almost blinding you for about 15-20 minutes or so.  Well, the last three migraines that began with an aura (they all do), I did something a little different and had success stopping the migraine before it even started!  And I have never been able to stop one in 25 years when the aura has already begun.  They are HORRIBLE!  :-(

First, I put my hair up off my neck, and then rub organic extra virgin olive oil all over my neck and shoulders.  They tend to get very sore and hurt when I have a migraine.  Then I get my organic peppermint oil, and rub a couple drops into the olive oil areas of my neck.  It is better to already have olive oil on your hands as straight oils can burn the skin if not careful!  I also take a drop orally on a cracker, nut butter or something.  I also like to put that olive oil/peppermint oil mixture on my temples too, but I am very careful around the eye area as the oil can burn.  It is VERY important to always dilute essential oils in a carrier oil (such as olive) when applying to skin.

Next, I found white willow bark extract.  It is the same stuff that aspirin is made out of, but is NATURAL. :-)  It is one heck of a pain killer, as I found out when I started taking it previously once I already had the bad migraine, but what I realized is that it also helps prevent one once the aura begins!  Amazing!  Just this morning I started an aura (I think from digging our barn out of snow yesterday and simply taxing my neck and shoulders WAY too much), and I took several droppers of willow bark immediately (use your own judgment about how much you want to use!).   Once the aura stopped (and it didn't last as long either), the migraines never started!  This same thing happened the last two times I had an aura as well.

Third is WATER!!  And lots of it!  I have been realizing that I am very dehydrated most of the time.  Headaches are caused frequently by simply being dehydrated!  Drinking does not come naturally to me as I am SO busy most of the time between running a farm, homeschooling, and everything else, so lately I have made an honest effort to drink half my body weight in water every single day.  And not just plain water, but water with sea salt and ACV in it to replace electrolytes.  Drinking this much water without the minerals and salt replaced too can be dangerous, so do your own research and come up with a balance that works for you.

I also take two other things:   Immune Tonic from Urban Moonshine (a wonderful Vermont-based company - we LOVE their bitters and use them all the time at meals for digestion) which has all kinds of immune healing herbs in it.  And the second thing, when I have it on hand, is an herbal tonic that I get from my acupuncturist/herbalist called "Clear Heat" which is simply a combination of cooling herbs that reduce the inflammation (called "heat" in Chinese Medicine) in the body.  The Immune Tonic has predominantly warming herbs in it such as the mushrooms, ginger, and astragalus, but seems to help nonetheless!​
​
Morning Lemon Flush!
Thanks to a video I saw on youtube last summer, I have been drinking this lemon drink every morning and have been seeing many positive health benefits from it!  It is a great immune booster and a liver detox. I found it on the Paleo Secret youtube channel here:  https://www.youtube.com/watch?v=y0tkjAPtbUw.  Also, here is more information on the benefits of lemons!  http://www.well-beingsecrets.com/lemon-water-benefits/

We use Bariani Organic extra virgin olive oil (order from Radiant Life - on the top of the shopping guide from Weston Price), and organic lemons.  We like using our Vitamix since it blends so nicely, but any blender will do!  Here is a photo of ours! 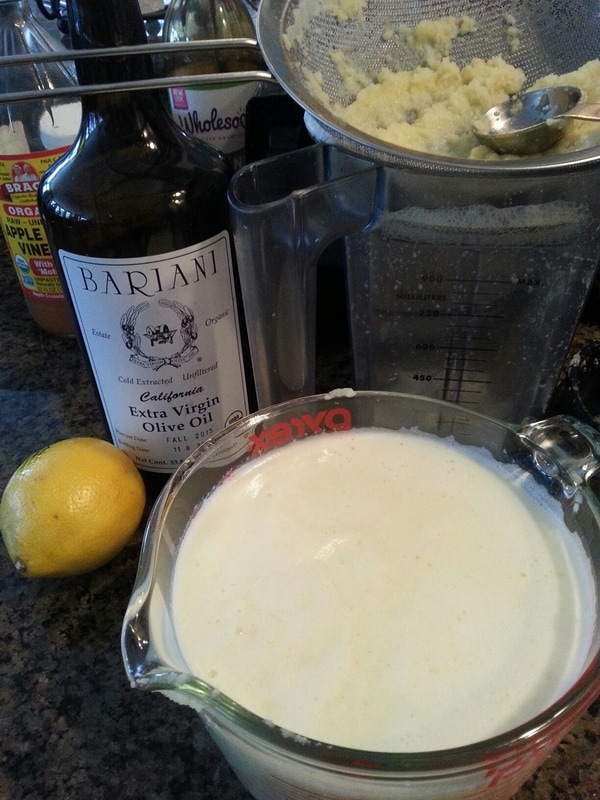